What Is a Thermostatic Expansion Valve? 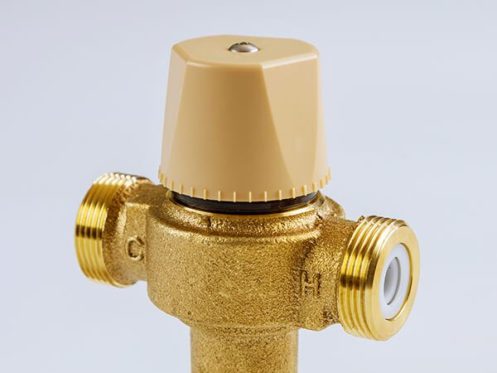 The thermal expansion valve, commonly known as the TXV or TEV, is a fundamental component in the HVAC industry. This valve plays a vital role in controlling the amount of refrigerant being released into the evaporator section. In so doing, it can control and regulate the differential range between superheat and the current temperature of the refrigerant at the evaporator outlet. Additionally, the TXV can maintain a stable saturation temperature at the current evaporating pressure.

The thermal expansion valve purposefully controls the refrigerant flow into the evaporator in response to the state of the cooling load. The valve mechanically measures the superheat of an outlet and responds by either increasing or decreasing the refrigerant flow to maintain stable superheat. The TXV is useful in many refrigeration systems, and it is typically located just before the evaporator.

The TXV has several variations in design, but they all conform to a similar working principle. Within the expansion valve, there exist the main components that are listed below.

The sensing bulb works with a capillary line to measure the temperature of the refrigerant at the evaporator exit, and in response, depicts whether the valve is to open or close.

The TXV expansion valve is usually located between the evaporator and the condenser. Within the valve’s main body, there is an inlet and outlet valve. Similarly, it contains a removable cap that plays a role in the adjustment of the superheat. As well, there exists a coil that aids in sensing the superheat when stretched out. The bulb is situated at the exit of the evaporator and is crucial in ensuring that the refrigerant is boiling off.

How Does the TXV Work?

Next, the pressurized liquid refrigerant is directed through a small orifice that significantly causes a decrease in pressure as it passes through. As the pressure reduces, some of the refrigerants vaporize while the rest remains in a liquid state. A simple illustration of this working principle is the bottle spray nozzle; the highly pressurized water is ejected out through a small orifice into an area with much lower pressure, causing the water to become part vapor and part liquid.

The liquid-vapor refrigerant mixture is sprayed into the evaporator, absorbing heat from the surrounding air within the pipe. The refrigerant moves through the evaporator, being exposed to intense thermal energy and undergoes a total phase change and ultimately becoming a saturated vapor at the end of the evaporator coil. A constant temperature is maintained during this phase because of latent heat; instead, the temperature increases during the enthalpy and entropy phases.

The refrigerant then proceeds to gather thermal energy, and after the phase change, it begins to experience an increase in temperature. This results in the superheating of the refrigerant vapor. The sensing bulb keeps an eye on the temperature variations and regulates the refrigerant within the main valve.

Within the sensing bulb lies a certain percentage of the refrigerant that is usually separated from other sections and is constrained in a closed area. The rise in temperature is detected by the sensing bulb while thermal energy transfers through the wall of the pipe into the bulb, causing the refrigerant that is contained in the bulb to undergo a boiling phase and later evaporate.

Since the refrigerant is usually confined in a small space, it leads to increased pressure. This forces the refrigerant along the capillary tube and into the top area of the expansion valve. Eventually, the diaphragm is forced down, exerting pressure on the pin, which in turn compresses the spring, allowing more refrigerant into the evaporator.

The valve then adjusts to a proper position to ensure the force exerted on the diaphragm is almost equal to or greater than the force exerted on the spring, which is exerting force in the opposite direction. It allows for the desired amount of refrigerant to pass, cooling the superheated refrigerant and reducing its temperature. The sensing bulb works to detect this change and does self-adjustments until equilibrium is achieved.

When the cooling load reduces, there is a simultaneous decrease in the superheat temperature. Similarly, the sensing bulb detects the change and reduces the amount of refrigerant flowing into the evaporator. Next, the refrigerant contained within the capillary starts flowing back into the bulb while the main valve starts to close. Once again, the superheat temperature begins to rise.

In the long run, the valve equalizes, allowing the desired amount of refrigerant to flow, matching the superheat setting.

When the valve doesn’t respond or react to the superheat temperature, the valve may let the liquid refrigerant pass through into the compressor. If this happens, it has the potential of causing severe internal damage to the valve since liquids aren’t easily compressible.

All these processes happen within the TXV valve, which is why it maintains its popularity in HVAC systems. The TVX’s role in the refrigeration process is undoubtedly very essential, and it continues to be used in modern manufacturing of HVAC units.

At Environmental Heating & Air Solutions, we strive to offer quality services in air conditioning maintenance, installation, and water heater installation in the Northern California region. Additionally, we provide air sealing and home insulation services. If you are in need of heater repair or installation services, be sure to browse through our service list for more information. Contact Environmental Heating & Air Solutions in Roseville, CA, today to schedule an appointment.